Connection Between Art and Music

Traditional artworks, such as paintings and sculptures, for example, are witnessed and appreciated through our sense of sight. Music, on the other hand, is enjoyed by hearing the melody and listening intently to the meaningful lyrics.

At a glance, it’s apparent that art and music appeal to different senses. But a closer look will reveal that they, in fact, share a connection and are intertwined in more ways than one. In a sense, art and music feed off of each other and complement each other to create a more meaningful, reflective, and emotional experience for the beholder.

Where Art and Music Intertwine

They say that music is a form of art. And for many reasons, they are correct. Art and music share a deep connection, owing to their similar elements.

Music Through a Visual Lens

Music and sound are things that we consume primarily through our sense of hearing, but although unnoticeable, we digest them through a visual artistic lens. Think of it this way. When you envision your favorite song, you don’t just hear its melody or think of the most impactful lyrics. You also see its album or track art, or maybe even a clip from its music video.

Some canvas paintings can easily function as album covers and reinforce a certain genre or musical style. For example, “Redwings Moon” by Laveta Kirby would have made a fitting album cover for a Pink Floyd album. Vice versa, some artists also draw inspiration from music to influence their masterpieces and evict specific emotions.

For as long as we can trace, visual art has always been used to compliment music, serving as a gateway to the listening journey and introducing new expressions and emotions that resonate with the viewer. And because both music and art are subjective, their meanings and connections depend greatly on individual impressions and interpretations.

Power to Evoke an Emotional Response

Both music and art have the power to unlock an emotional response from its listeners or viewers. They’re reminiscent of memories and can trigger moods, shape emotions, provide comfort, and inspire. In short, all art forms, regardless of medium, have the power to connect to their beholders and portray a different meaning for each one.

Artists That Exemplify the Relationship of Art and Music

Music and art have always had a symbiotic relationship — a fact that is undeniable, especially looking back at the greatest collaborations between musicians and painters in history. Famous painter Andy Warhol was the artist behind iconic album covers for The Rolling Stones and Aretha Franklin. In singer/songwriter Paolo Nutini’s album “Scream,” the album art showed a red bird surrounded with splashes of color. This is a cropped section of “Cyclone,” a 2011 painting by artist Dan Baldwin.

Many painters and artists have worked with famous musicians to complement their music with stunning album art. Perhaps the most notable is the work of Sir Peter Blake, the co-creator of The Beatles’ album cover for “Sgt. Pepper’s Lonely Hearts Club Band.” For his recognizable and iconic work, Blake has been given the moniker “Godfather of British Pop Art.”

English artist Stanley Donwood is also one with solid links to the music industry. Given the title as “the 6th member” of the rock band Radiohead, Donwood produced every album and track artwork for the band — from their breakthrough album “The Bends” in 1995 to their last hurrah “Atoms for Peace” in 2013.

Like Donwood, artist Storm Thorgerson also dedicated most of his work to creating album covers for the British rock band Pink Floyd. Until his passing in 2013, he designed over 16 album artworks and produced a number of the band’s artistic music videos. His greatest work is the release of the best-selling album “Dark Side of the Moon,” which features imagery that takes inspiration from reputable artists like Pablo Picasso, Salvador Dali, and Roy Lichtenstein.

Art and Music: Influencing Each Other

On their own, art and music share the common element of evoking an emotional response. But together, they heighten the listening and viewing experience. A painting that is complemented by music can unlock new emotions and interpretations from the viewer. In the same way, a song or tune that is matched with the perfect track art can reflect its genre and enhance the musical masterpiece.

Art and music are not only similar and closely intertwined, but they also influence each other and come together to create a brand new meaningful experience. Shortly after music came to be in the Paleolithic period, it has always collided with art to deliver not only audio but also a visual escapade.

Robert Lyn Nelson’s love of music has inspired many of his newest works. He started his Beatles Tributes Series in 2008 and it has become the artist’s most popular collection. Some of the most popular paintings in this series include Hey Jude, Lucy in the Sky with Diamonds, Across the Universe, and Strawberry Fields Forever. View the special series and other works inspired by RLN’s favorites musical artists, songs, instruments and genres below. 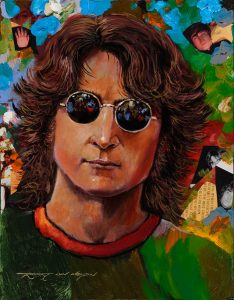 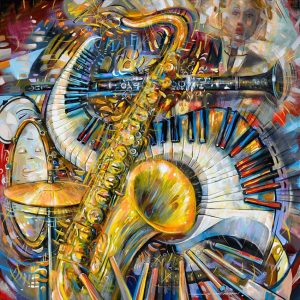 ← How To Buy Art NFTs Best Art Museums in the US →
Manage Cookie Consent
We use cookies to optimize our website and our service.
Manage options Manage services Manage vendors Read more about these purposes
View preferences
{title} {title} {title}