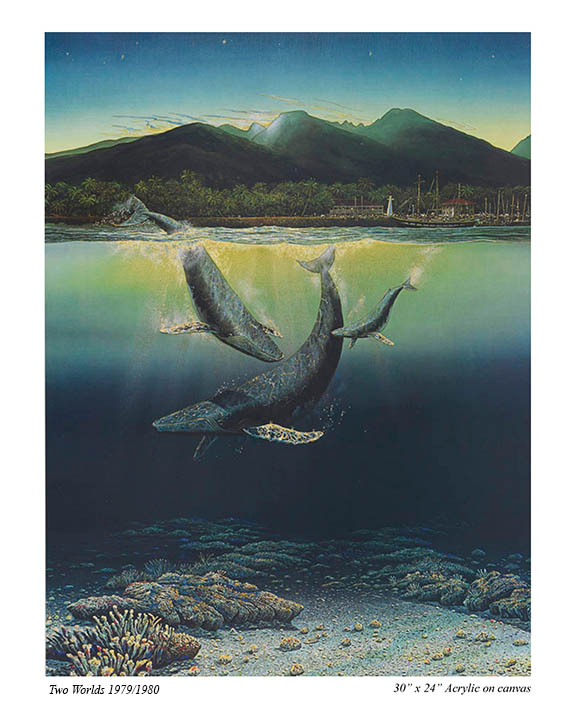 Robert Lyn Nelson’s love of the ocean and surfing was part of the reason he became a permanent resident of the beautiful island of Maui in the state of Hawaii.

In 1979, while out surfing during Humpback Whale season off the shores of Maui, a group of whales swam up to Nelson and his friends. This was his first close encounter with a whale and it was a most AMAZING experience! He had been painting whales based on his studies of Hawaiiana, the history of Hawaii, and seeing one up close inspired the artist to paint more whales and underwater scenes. However, Nelson felt that people weren’t able to relate to just the underwater scenes and life.  His idea to add land to his ocean paintings came while SCUBA diving. This vision of life both above and below the surface of the ocean helped to give everyone that connection….it gave them something to hold on to.

It was in late 1979 and early 1980 when Nelson created the painting that changed things for him and his art.  This painting was called, Two Worlds.

From this first painting depicting the both above and below the surface of the ocean, a new artist genre was born, The Modern Marine Art Movement.

Learn more about the history of the world famous “Two Worlds” style of painting and the Marine Art Movement from the artist and his long-time friend, Jean-Michel Cousteau. Video taken at Robert Lyn Nelson’s exhibition at the Smithsonian Museum of Natural History. 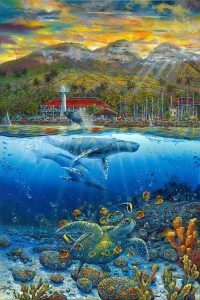